I found a terrific little template that allows a short story to be printed onto a single page and then folded up into an eight-page book. The first prototypes look great! Soon I’ll be taking orders so that you can have your own pocket book for whenever you want a quick story fix.

I also have several published longer-form essays that will be also be available as solos so stay tuned for those. 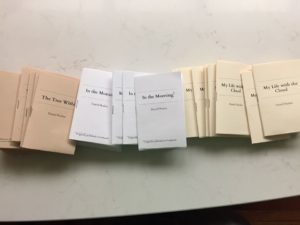 The reasons we need Remembrance Day for Lost Species are the same reasons I wrote my book, “Brief Eulogies for Lost Animals: An Extinction Reader.” The introduction to the book follows below. (You can also find audio and video versions.)

“Forgetting is another kind of extinction,” artist Todd McGrain said to me when I interviewed him in 2012. For ten years he had been creating larger-than-life sculptures of birds formerly common in North America, such as the passenger pigeon, to memorialize them. “These birds are not commonly known,” he has written elsewhere, “and they ought to be… It’s such a thorough erasing.”

Since the year 1500, nine hundred species have become extinct, yet their stories are not being told. This loss is a crisis in human values, as our relatives on the tree of life are disappearing under our watch and because of our actions. Aside from a few high profile extinctions, like the passenger pigeon and the dodo, most lost species are unknown to the general public, and the danger of forgetting part of our biological heritage is great. There are no historical parallels here. Aldo Leopold said, “For one species to mourn another is a new thing under the sun.” 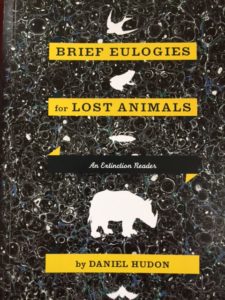 The recent animal extinctions include twenty-eight reptiles, thirty-four amphibians, sixty-three fish, sixty-three insects, ninety-two mammals, one hundred and sixty-six birds and more than three hundred mollusks. Who are these animals? Where did they live? What do we know of their biology and natural history? Each animal had its own evolutionary history, ecological niche and characteristics that made it a unique form of life. But they have disappeared from the Earth due to our actions and without proper recognizance. The beginning of wisdom, the Chinese say, is to call things by their rightful names. In many cases, the names are known by scientists and what little is known of the animal’s habits is hidden away in scientific papers. These details need to be brought to light to make the species come alive, at least in our imagination, to help bring the enormity of what has and is happening within our grasp.

Evidence abounds that the present species extinction rate is more than one thousand times the historical rate measured in the fossil record — an indication that we are in a mass extinction. Life on Earth has seen five mass extinctions, the most recent being sixty-five million years ago when the dinosaurs were wiped out. This sixth extinction is human-caused with habitat alteration, over-exploitation, introduction of invasive species and pollution the major factors.

Naturalist William Beebe wrote in 1906 that, “when the last individual of a race of living beings breathes no more, another heaven and another earth must pass before such a one can be again.” Our heaven exists now and by memorializing and celebrating what is now gone, we can perhaps keep what we still have.

Two reviews have been published of my book, “Brief Eulogies for Lost Animals: An Extinction Reader,” with more to come.

Over at Neon Books, writer and publisher Krishan Coupland lauds the “sheer poetry” of the writing and “the power of these vignettes… to render these animals real.”

Read the whole review at neonbooks.org.uk, and while you’re there, check out the other cool things that Krishan is up to at Neon Books.

A second review was written by biologist and writer, Mike Shanahan, who asks, “Can eulogies for lost species help prevent future extinctions?” Read Shanahan’s thoughtful response at his e-home Under the Banyan.

Other reviews are forthcoming. Get in touch if you would also like to review my book.

Since the year 1500, nine hundred species have become extinct, yet their stories are not being told. This loss is a crisis in human values as our relatives on the tree of life are disappearing under our watch and because of our actions.

There are no historical parallels here. Aldo Leopold said, “For one species to mourn another is a new thing under the sun.”

BRIEF EULOGIES for LOST ANIMALS: An Extinction Reader fills an important niche by remembering these animals in lyrical but factual stories that allow us to celebrate, grieve, and memorialize what is now gone.

In terse yet evocative writing, one hundred extinct animals from around the world are brought to life, from the freshwater mussels of Appalachia to the shrub frogs of Sri Lanka, and from the honeycreepers of Hawaii to the hopping mice of Australia, bringing the enormity of the present biodiversity crisis within our grasp.

BRIEF EULOGIES for LOST ANIMALS: An Extinction Reader is available from the publisher’s website: penandanvil.com/brief-eulogies, where you can also find excerpts of the book.

“Forgetting is another kind of extinction,” artist Todd McGrain has said about his Lost Bird Project. These animals deserve to be remembered, and with this book we can not only remember and mourn them, but honor them as well.