It’s not everyday you get to visit 565 million year old fossils.

But on the edge of the Newfoundland’s Avalon Peninsula, which feels like the edge of the known world, you can visit some of Earth’s oldest fossils of complex life. They’re old enough to predate the Cambrian period, and now belong to their own geological period: the Ediacaran.

But what are they? Are they connected to the animals of the Cambrian period and the rest of the Tree of Life? Or were they an experiment that flourished for millions of years before fading away?

Those questions were on my mind as I visited Mistaken Point, now a UNESCO World Heritage site, and you can read about my adventures in the fall issue of Hidden Compass.

Below are a few photos of my visit.

Read my essay, The Medusa of Time, at Hidden Compass.

What do extinct species have to tell us?

A short hike along the coast out of Joe Batt’s Arm on Fogo Island, Newfoundland, stands a five-foot tall bronze sculpture of the Great Auk. The sculpture was created by artist Todd McGrain for his Lost Bird Project in which larger-than-life sculptures for extinct North American birds were placed where they last thrived. On my visit to Fogo Island this past August, I knew I had to visit the sculpture.

The story of the demise of the Great Auk is among the more tragic of the recent animal extinctions. They were flightless birds but strong swimmers that occupied rocky, isolated islands in the North Atlantic for thousands of years for mating and breeding. The largest colony was at Funk Island, about 50 kilometers northeast of Fogo Island. When European fishing vessels came to Newfoundland for the abundant cod stocks in the early 16th century, they seized on the Great Auk as a source for fresh meat as well as oil for lamps. Their feathers were used for pillows and mattresses and their eggs were collected for food.  Eyewitnesses reported seeing the tame, penguin-like birds being guided up gangplanks onto boats. Evidently, it was a wholesale slaughter. As their numbers plummeted through the 1700’s, extinction warnings went unheeded. And when auks replaced eider as the down of choice, their fate was sealed. The last pair of great auks was strangled off Iceland in 1844 while incubating an egg.

At the head of the path out of Joe Batt’s Arm, a handmade sign showed the way for the Great Auk sculpture. It was only an hour’s walk along a grassy trail with a view of the once-molten coastal rocks, the harbor, and the ritzy Shorefast Inn across the small bay.

I was with a friend and soon we climbed a large granite outcropping and made our way to the sculpture.

Waves lapped at the rocks below and a steady but mild breeze blew. A few terns cried as they swooped over the waves. The sculpture stood about five feet tall and faced the direction of another Great Auk sculpture in Iceland. With its smooth lines and elegant curves, I couldn’t help but run my hand over it.

It was well placed, so solitary among the elements. Perhaps it was too solitary. They were social birds and their colonies like Funk Island must have been incredible gatherings, full of squawking mates protecting their eggs, taking turns splashing and into and out of the water to fish. It would have been great for the sculpture to have companions. I wished I could populate the site with a group of Great Auks, like Errol Fuller’s painting. And I thought about how different the hike would have been completely different if Great Auks were still wandering and swimming about. (See Brandon Ballangee’s “Framework of Absence.”)

We took photos then sheltered in the crevice of some boulders and sat with the sculpture for awhile. It felt special to be alone with it, while thinking about why the sculpture was there in the first place.

When we continued the hike further down the coastal trail and stopped to have our sandwiches, a strange feeling gnawed at me. Something was missing from my visit with the Great Auk. I felt like I needed something to signify our visit, some sort of ritual. I said to my friend that I wanted to stop again at the Great Auk on the way back and we set off again to the sculpture.

I remembered the scene in the documentary film, The Lost Bird Project, when after the sculpture is installed, McGrain anoints it with water. Back at the sculpture, I poured some water from my water bottle into my cupped hand and let it drip onto its head. In that moment, the ritual caught me and suddenly felt significant. It was a moment of honoring the memory of the Great Auk and grieving its loss. Thinking about it afterwards, perhaps it wasn’t me blessing the sculpture, but it was the Great Auk blessing me?

As we learn the stories of recently extinct animals, I wonder what they will teach us. It was strange for me to form a sort of bond with a bird that has been extinct for a century and a half. Every animal has its own tale, and as Todd McGrain told me when I interviewed him, it’s up to us to pay attention. 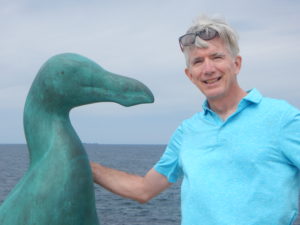