I caught myself saying this yesterday and today, regarding the election of Donald Trump to the presidency, over the much more qualified Democratic nominee, Hillary Clinton. Apart from my objections to the extreme and divisive statements Mr. Trump made in his campaign, I’m particularly concerned about his policies on climate change and the environment.

Really, the question is “How could we let this happen?” We actually let three debates pass by without a single question on climate change, the biggest issue of our time. We on the coasts need to  be concerned about climate change for the inevitable sea level rise. Both on the coasts and inland we need to be concerned about drought conditions (see the latest map here that shows parts of California, the Northeast and the Southeast suffering from severe drought), which, if prolonged, will start affecting food supplies. Internationally, we need to be concerned because, in the case of Syria, the droughts caused by climate change had a direct role in fomenting the conflict that created a humanitarian crisis with the exodus of more refugees than neighboring and Western countries wanted to take in. Have a look at how Bangladesh is faring in our warmed world, or the island nation of Kiribati and one can only conclude that the era of the “climate change refugee” has already begun.  In fact, the USA already has its own climate refugees.

Yet despite describing climate change as “A hoax perpetrated by the Chinese,” Mr. Trump was still able to get himself elected.

I took some solace in finding out that there are provisions in last year’s Paris Climate Treaty, which prevent easy withdrawal. (It takes three years, and there’s still a twelve-month waiting period after that.) But it would be easy for Mr. Trump to undo President Obama’s modest gains on reigning in emissions and investment in renewables and thus for the US to fall short of the Paris targets. (See the big piece in today’s New York Times.)

I just read through a lengthy discussion about Mr. Trump’s environmental plans on Reddit, kicked off by an informative summary by u/arksien (a long-time Redditor). The thread has more than 3500 comments both by Americans and from people around the world. Together with the piece in the Times mentioned above, it’s truly a cold slap in the face about what awaits us under President Trump.

The USA has always been a country of leaders.

And now is the time for the USA to lead us out of climate danger. If we let Mr. Trump and his cohort make good on his promises to expand fossil fuel usage, we’re dooming ourselves and our children to increased climate misery and uncertainty. The last five years have been the hottest ever.  Given Mr. Trump’s character, it is going to be incredibly difficult to convert him to a climate hero — therein lies the challenge. Now is not the time for complacency. We all must engage the crisis. If the leaders won’t lead on this most fundamental of issues, we must lead ourselves.

Now, when’s the next 350.org meeting and where do I send my dues? Hope to see you there. 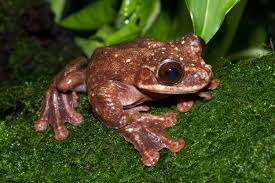 On Dec. 15th, 2015, Toughie, the last Rabb’s Fringe-Limbed Tree Frog sang out from his home in the Atlanta Botanical Gardens. After several years in captivity, he was advertising his presence to a mate who wasn’t there. The call, of course, went unanswered.

A captive breeding program a few years ago had failed and when another male died at the Atlanta Zoo, the species line of Rabb’s Fringe-Limbed Tree Frogs, one of almost 7600 amphibian species that have been diversifying over the last 300 million years, came down to just Toughie.

Toughie passed away a month ago, on September 26.

Toughie was an endling, the last survivor of his species. Extinction is usually so silent and remote that it’s always a surprise, if not a pleasant one, to encounter an endling. He joins Martha, the last passenger pigeon, Incas, the last Carolina parakeet, Booming Ben, the last heath hen, and Benjamin, the last thylacine as the handful of endlings who became famous. Toughie has his own Wikipedia page. He was featured in the film Racing Extinction. His image was projected onto St. Peter’s Basilica during the Paris climate talks.

The story of another endling haunted me into writing a book about recently extinct species, to be launched this fall . The golden toad was a spectacular amphibian from Costa Rica’s cloud forest in Monteverde. Against the luscious greens and dull browns of the cloud forest floor, its coat was a brilliant orange, as if dipped in enamel paint. Only discovered in the 1960’s, the golden toad was rarely seen, except in the spring when they would gather and mate in the temporary pools. In the 1980’s the population crashed and year by year fewer were seen until just one was recorded in 1989. None have been seen since.

By the time I visited Monteverde in 2001, the golden toad was long gone. But that’s where I first heard its story and it has stayed with me. While the biological diversity of the Monteverde Cloud Forest Reserve is something to behold, from epiphytes and orchids to exotic birds, including the resplendent quetzal, I kept thinking about that last toad who was never to find a mate.

In an op-ed for the New York Times, Joseph Mendelson, a leader of the team that discovered Toughie’s species and the director of Zoo Atlanta wrote: “The planet is permanently changed. This frog’s ecological role among the animals and plants with which it evolved has been lost, along with whatever other secrets it carried.”

Toughie was one of many frogs collected from Panama in 2005 as the lethal chytrid fungus was sweeping through. Scientists likened the effort to rescuing belongings from a burning house. The species was unusual because of their large webbed hands that helped them glide safely from the trees to the ground, and for the male’s habit of letting tadpoles feed off the skin on its back.

In a 2015 paper in PNAS, Australian biologist John Alroy estimates that extinction rates are four orders of magnitude higher than normal and warns of the “runaway train of extinction” that will ultimately produce a global mass extinction not just on human times scales but on geological time scales. Humans are now the driving force in environmental change. Most species extinctions in the past few centuries have been due to habitat loss and modification, or to the introduction of invasive species. For frogs, humans have acted as agents to help move the chytrid fungus to places where it previously didn’t exist through the global trade of amphibians for food, for use as laboratory animals or for use as pets or display animals.

Whenever I visit a national park or some kind of nature reserve, I admire the foresight of previous generations who decided to set aside the land for enjoyment by all. What a legacy! I hope our legacy will be something so worthy. It would be grand if our legacy is that we did whatever we could to stop the extinction crisis from worsening.

Naturalist William Beebe wrote in 1906 that, “when the last individual of a race of living beings breathes no more, another heaven and another earth must pass before such a one can be again.”  Our heaven is now and it is passing through our fingers. With Toughie’s passing, the planet is indeed permanently changed. There is still much worth saving, but we must engage the problems first. Time is short.

In forty, eighty and one hundred years, I hope we can leave future generations more than just images and recordings of the wild.

The fourth and last US election debate has come and gone with scarcely any attention paid to important issues like biodiversity loss and climate change. They only become issues if we make them so. While most of us appreciate the effects of climate change, the threats to biodiversity and why it should be preserved are still not considered headline news.

Here are some useful infographics to help raise awareness of the problem of biodiversity loss:

A few years ago, I interviewed several eco-artists about their work. They include:

Stay tuned for more cool interviews in the near future!

The Fall issue of the Amsterdam Quarterly is a special issue on climate change. My contribution, The Pianist Plays for the Melting Glacier, was inspired by Ludovico Einaudi’s “Elegy for the Arctic,” played here in this moving Youtube video.